July 18, 2017 – Canonsburg, Pennsylvania - Corsa Coal Corp. (TSXV: CSO) (“Corsa” or the “Company”) announces that it will issue its second quarter earnings release after the market close on Wednesday, August 16th.  An updated investor presentation has been added to www.corsacoal.com. 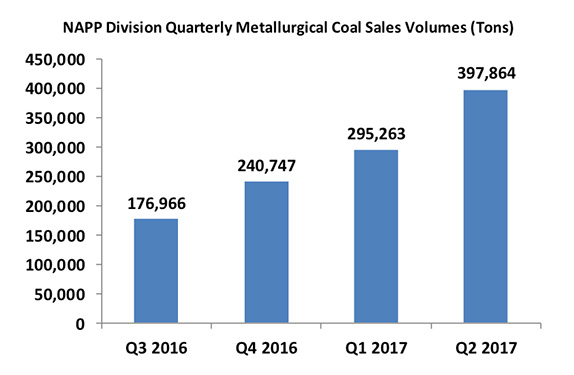 Over the second half of 2017, Corsa expects its Company Produced metallurgical tons to increase as compared to first half 2017 levels, as production from the Acosta mine and a surface mine ramps up.  Additional metallurgical coal production is expected to come from Corsa’s Cooper Ridge mine which is a part of the CAPP Division.

Update on the Acosta Mine
The Acosta mine successfully commenced production in early June, consistent with previous guidance.  Early indications are positive from a geologic, equipment, and hiring standpoint.  Production from Acosta will increase over the second half of 2017, as additional shifts are added and a second mining unit is added in the fall. 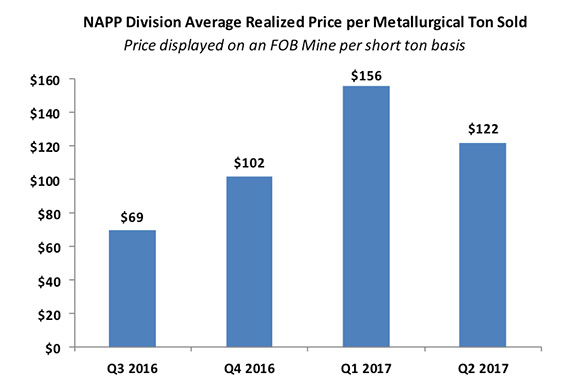 Pricing Commentary
Metallurgical coal prices declined from record levels in April after the Australian export terminals returned to service after the impact of Cyclone Debbie.  In July, prices reversed course and have risen by approximately 20%, as Chinese metallurgical coal miners have announced intentions to reduce output in response to seaborne prices breaching the $140/mt FOBT price level.  We view this move as a reflection of the cost curve for producing metallurgical coal in China and as a significant marker for estimating a long range metallurgical coal price.  Additional supply interruptions in Australia and the United States have occurred in July which pushed spot prices higher.  These moves in aggregate continue to suggest that the global supply chain for metallurgical coal remains fragile and prone to disruption.  On the demand side, the steel industry is enjoying profitable prices globally and production growth has been robust in the first half of 2017, with global crude steel production up 4.7% YTD through May.  Multiple catalysts for continued strong steel pricing and production levels exist in the second half of 2017, including a strong economic outlook, the potential for increased infrastructure spending in the United States and China, the potential for steel import tariffs in the United States, and the potential for higher blast furnace utilization rates in the United States.

Caution
The estimated coal production, projected market conditions and potential development disclosed in this news release are considered to be forward looking information.  Readers are cautioned that actual results may vary from this forward looking information.  Actual sales are subject to variation based on a number of risks and other factors referred to under the heading “Forward-Looking Statements” below as well as demand and sales orders received.

Forward-Looking Statements
Certain information set forth in this press release contains “forward-looking statements” and “forward-looking information” under applicable securities laws. Except for statements of historical fact, certain information contained herein relating to projected sales, coal prices, coal production, mine development, the capacity and recovery of Corsa’s preparation plants, expected cash production costs, geological conditions, future capital expenditures and expectations of market demand for coal,  projected market conditions and potential development constitutes forward-looking statements which include management’s assessment of future plans and operations and are based on current internal expectations, estimates, projections, assumptions and beliefs, which may prove to be incorrect. Some of the forward-looking statements may be identified by words such as “estimates”, “expects” “anticipates”, “believes”, “projects”, “plans”, “capacity”, “hope”, “forecast”, “anticipate”, “could” and similar expressions. These statements are not guarantees of future performance and undue reliance should not be placed on them. Such forward-looking statements necessarily involve known and unknown risks and uncertainties, which may cause Corsa’s actual performance and financial results in future periods to differ materially from any projections of future performance or results expressed or implied by such forward-looking statements. These risks and uncertainties include, but are not limited to: risks that the actual production or sales for the 2017 fiscal year will be less than projected production or sales for this period; risks that the prices for coal sales will be less than projected; liabilities inherent in coal mine development and production; geological, mining and processing technical problems; inability to obtain required mine licenses, mine permits and regulatory approvals or renewals required in connection with the mining and processing of coal; risks that Corsa’s preparation plants will not operate at production capacity during the relevant period, unexpected changes in coal quality and specification; variations in the coal mine or preparation plant recovery rates; dependence on third party coal transportation systems; competition for, among other things, capital, acquisitions of reserves, undeveloped lands and skilled personnel; incorrect assessments of the value of acquisitions; changes in commodity prices and exchange rates; changes in the regulations in respect to the use, mining and processing of coal; changes in regulations on refuse disposal; the effects of competition and pricing pressures in the coal market; the oversupply of, or lack of demand for, coal; inability of management to secure coal sales or third party purchase contracts; currency and interest rate fluctuations; various events which could disrupt operations and/or the transportation of coal products, including labor stoppages and severe weather conditions; the demand for and availability of rail, port and other transportation services; the ability to purchase third party coal for processing and delivery under purchase agreements; and management’s ability to anticipate and manage the foregoing factors and risks. The forward-looking statements and information contained in this press release are based on certain assumptions regarding, among other things, coal sales being consistent with expectations; future prices for coal; future currency and exchange rates; Corsa’s ability to generate sufficient cash flow from operations and access capital markets to meet its future obligations; the regulatory framework representing royalties, taxes and environmental matters in the countries in which Corsa conducts business; coal production levels; Corsa’s ability to retain qualified staff and equipment in a cost-efficient manner to meet its demand; and Corsa being able to execute its program of operational improvement and initiatives. There can be no assurance that forward-looking statements will prove to be accurate, as actual results and future events could differ materially from those anticipated in such statements. The reader is cautioned not to place undue reliance on forward-looking statements. Corsa does not undertake to update any of the forward-looking statements contained in this press release unless required by law. The statements as to Corsa’s capacity to produce coal are no assurance that it will achieve these levels of production or that it will be able to achieve these sales levels.