Second Quarter and First Half Highlights

Peter Merritts, Chief Executive Officer of Corsa, commented, “During the second quarter of 2019, Corsa reached a milestone as all of our active mining locations are now operating at their full run-rate capacity.  We began realizing the benefits of this ramp-up in the second quarter, as production from our mines hit a new five-year high for the Company, surpassing the previous quarterly production record, set in the first quarter of this year, by 13%.  Operations continued to perform well in the second quarter as cash production cost per ton sold improved by 8% from a year ago.  We expect to continue to experience these benefits as the year progresses.  The Company made significant advances on free cash flow generation during the quarter increasing the Company’s cash position by $4.5 million.

The outlook for metallurgical coal pricing is challenged in the upcoming months, and we are taking steps to minimize the market decline impact on our business.  Although the market has weakened in the near term, we continue to believe the fundamentals for metallurgical coal pricing will remain supportive in the coming quarters, driven by continued global economic growth and limited investment in new coal production.  As a result of this market pull back, we have adjusted our guidance downward to reflect the impact of the current price forecasts.  We expect to continue to be profitable in the existing price environment and will continue to focus on cost control and discipline in managing our operations.” 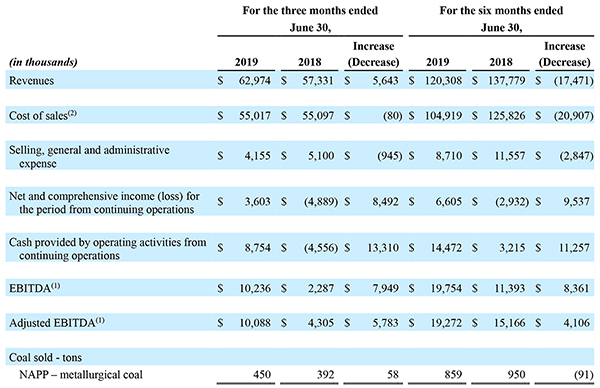 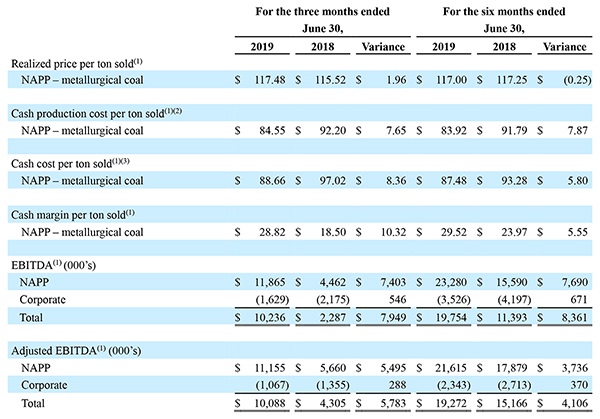 Corsa’s updated guidance for the year ending December 31, 2019 reflects the impact of coal market reactions to concerns of a slowing global economy.  This reaction caused index prices to weaken and is the primary reason that our guidance has been reduced.  Additionally, in response to the market decline, Corsa has reduced general and administrative expense. 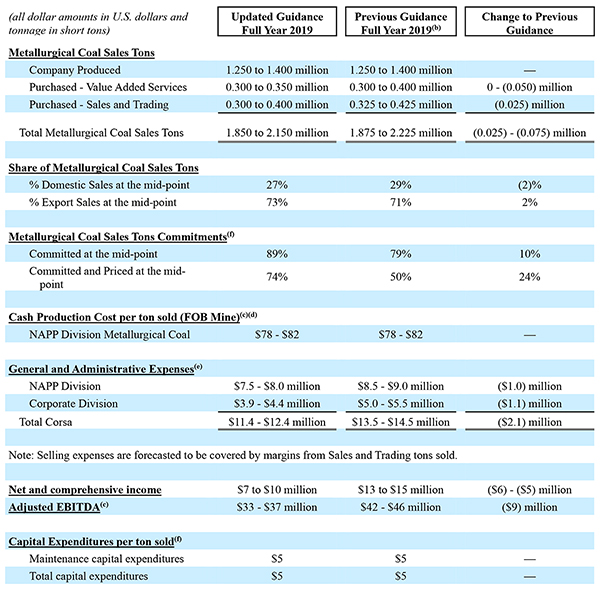 Price levels stayed above $200/metric ton (“mt”) delivered-to-the-port basis (“FOBT”) for spot deliveries of Australian premium low volatile metallurgical coal through early June, hitting a high in mid-May of $210/mt, primarily due to strong imports into China and India. Late in the second quarter the market reacted to concerns of a slowing global economy and finished at $193 FOBT for Australian premium low volatile metallurgical coal.  Since the end of the second quarter 2019, spot prices have further weakened to $154/mt, a decrease of $62/mt since the beginning of 2019, a 29% decline. The quarterly price average for the second quarter of 2019 was $203/mt FOBT for Australian premium low volatile metallurgical coal, compared to $207/mt in the first quarter of 2019.  The forward curve for the balance of the year has weakened with current prices at $161/mt down $22/mt since the beginning of the year. The forward curve for 2020 declined from $175/mt to $160/mt.

In late May 2019, Turkey reduced its import tariff on imported coking coal from the U.S. from 13.7% to 5%. The lower import tariff will allow U.S. coking coal exports to be sold into Turkey more competitively. Recent news has been focused on bankruptcies of U.S. coking coal producers. Currently, there are three U.S. producers in bankruptcy and two of the producers have shut down production, which has limited near term supply availability. Finally, U.S. domestic buyers have started their annual buying process by issuing the first round of tenders for 2020 business.

Refer to Corsa’s unaudited condensed interim consolidated financial statements for the three and six months ended June 30, 2019 and 2018 and related management’s discussion and analysis, filed under Corsa’s profile on www.sedar.com, for details of the financial performance of Corsa and the matters referred to in this news release.