May 8, 2019 – Canonsburg, Pennsylvania - Corsa Coal Corp. (TSXV: CSO) (“Corsa” or the “Company”), a premium quality metallurgical coal producer, today reported financial results for the three months ended March 31, 2019.  Corsa has filed its unaudited condensed interim consolidated financial statements for the three months ended March 31, 2019 and 2018 and related management’s discussion and analysis under its profile on www.sedar.com.  An updated investor presentation has been added to www.corsacoal.com.

George Dethlefsen, Chief Executive Officer of Corsa, commented, “Over the past two and a half years, Corsa’s operations have been in growth mode, as the Acosta, Horning, and Schrock Run mines have been developed, and as the Northeastern reserve base at Casselman has been developed.  As the Schrock Run mine is expected to achieve full development status later in the second quarter, we will reach the point where all our active mining operations will be operating at their full run-rate capacity.  We realized the benefits of this ramp-up in the first quarter, as production from our mines hit a five-year high for the company.  Additionally, despite being in an inflationary cost environment in the mining space, we reduced cash mining costs by 9% from a year ago.  We expect to continue to experience these benefits of increased scale as the year progresses.

With Corsa’s metallurgical coal production forecasted to double in 2019 from 2016 levels and sales volumes tripling over that period, we now plan to shift our near-term focus to free cash flow generation and deleveraging.  After investing heavily in capital expenditures over the past two years, we expect our free cash flow yield to increase in the coming quarters as our capital expenditure levels decline.  Growth remains a strategic priority for the Company, and we expect to receive the Keyser mine permit in the near future.  Once the permit is received, we will evaluate market conditions and the progress of our free cash flow generation prior to commencing this project.

First quarter profitability was driven by strong metallurgical coal production levels and cost performance.  As we entered the quarter, coal market conditions were temporarily softer than normal because of global macroeconomic concerns that arose in late December.  These conditions, in combination with managerial discretion on whether to sell tons or build inventory, resulted in shifting sales shipments out of the first quarter and into subsequent quarters of the year.  We are now experiencing robust demand for our low volatile metallurgical coal and expect to move higher levels of low volatile tons in upcoming quarters, including in the second quarter.  As a result, we are maintaining our profitability guidance for 2019.

The outlook for metallurgical coal pricing remains very healthy as global steel production levels remain elevated and coal supply disruptions continue to impact the market.  While the spot price of metallurgical coal has declined slightly since the beginning of the year, the forward price outlook for the remainder of 2019, 2020 and 2021 have all increased meaningfully.  We expect that the fundamentals for metallurgical coal pricing will remain supportive in the coming quarters and years because of continued global economic growth and limited investment in new coal production.  These market conditions, in combination with our expectations for the Company’s production and sales, give us confidence in our outlook.” 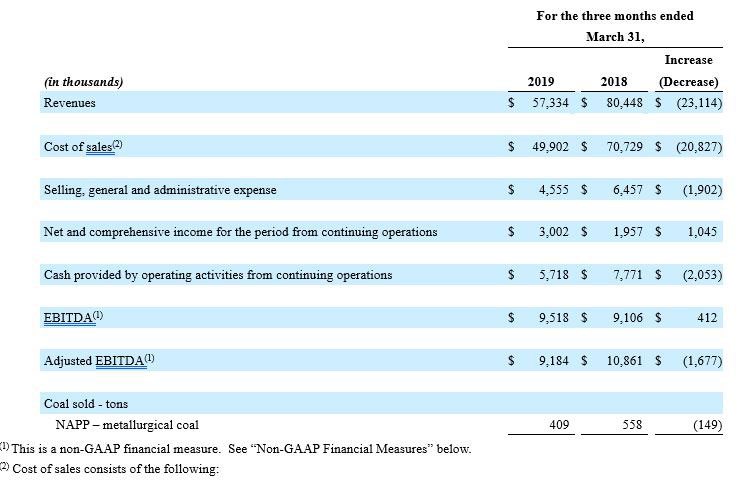 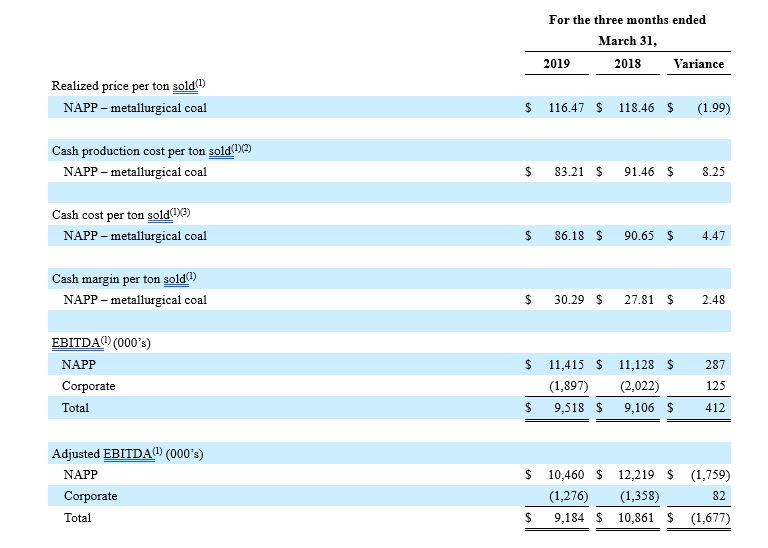 Corsa’s updated guidance for the year ending December 31, 2019 is as follows: 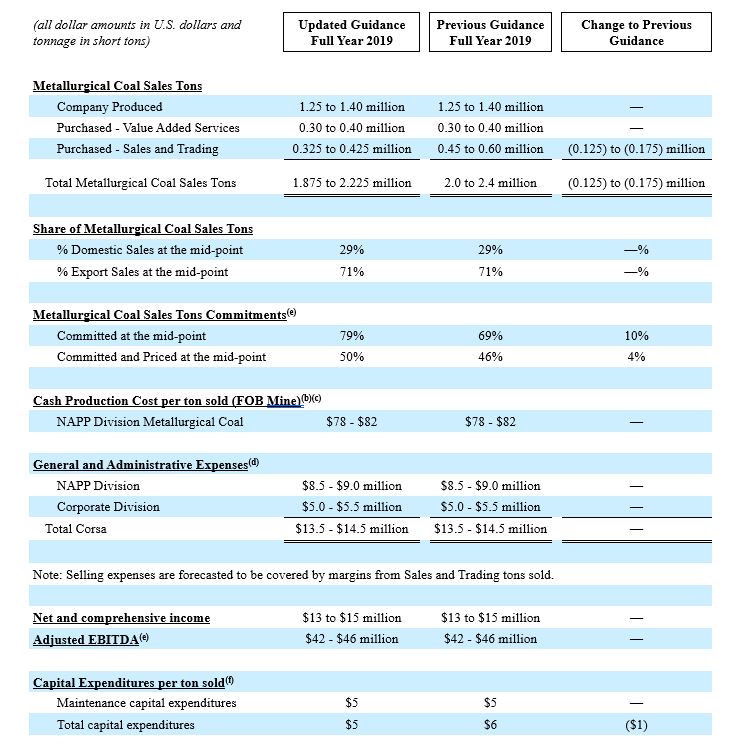 Overall, the metallurgical coal market remains well supported as steel production remains at elevated levels and as supply disruptions continue to arise.  Entering the first quarter of 2019, global macroeconomic growth fears, combined with Chinese import restrictions on Australian coals, put downward pressure on coal prices.  Since then, the spot market stabilized and remained relatively stable over the quarter.  Metallurgical coal producers, particularly the largest players, have shown supply discipline over the course of this cycle, which bodes well for future market balance.  We believe a high cost of capital for coal producers, a growing emphasis to have environmental, social and governance factors impact production and investment decisions, and a preference for dividends and share repurchases from major investors of coal producers will collectively serve to dampen new production of metallurgical coal going forward.  This, in combination with ongoing mine depletion, should support a rise in the global cost curve in the year ahead, which historically has led to higher metallurgical coal prices.

There is continued speculation that the U.S. and China will soon come to a trade pact which should benefit the global economy to support stronger global growth which would in turn lift steel demand. China also imposed import restrictions on Australian coals which slowed clearing customs from 20 days to a reported 40-60 days. Both events led to spot prices for Australian premium low volatile metallurgical coal finished at $205/metric ton (“mt”) FOBT from beginning the quarter at $211/mt while U.S. East Coast low volatile coal finished at $189/mt from beginning the quarter at $197/mt.  The futures market for Q2 2019 remains steady with prices currently at $200/mt.  Currently, the futures market for calendar 2020 is $190/mt and for 2021 is at $178.75/mt.  These are profitable levels for almost all of the global cost curve.

The World Steel Association recently issued its short-range outlook forecasting steel demand to be up by 1.3% in 2019. Growth in Asia, excluding China, is forecasted to remain robust with 6.5% growth expected in 2019. Through March, Chinese steel production was up 9.9% due to strong infrastructure spending. China represented 52% of global steel production. Global steel production was up 4.9% which was thirty-fifth straight month of positive annual growth. Preliminary U.S. metallurgical coal export data shows a 1.5% decline for a total of 8 million tons year-to-date through February. Steam coal exports are expected to weaken throughout the year as steam coal prices have weakened globally. If this trend continues, it should free up rail and terminal capacity and lessen congestion risks at the ports for metallurgical coal exports.

Refer to Corsa’s unaudited condensed interim consolidated financial statements for the three months ended March 31, 2019 and 2018 and related management’s discussion and analysis, filed under Corsa’s profile on www.sedar.com, for details of the financial performance of Corsa and the matters referred to in this news release.