George Dethlefsen, Chief Executive Officer, commented, “The Corsa team showed tremendous resilience in 2015 in dealing with unprecedented challenges across the industry.  We are extremely proud of our financial and operating performance for the year, as our reductions in cash mining costs have outpaced the decline in average realized coal prices.  We have taken steps to reduce every major cost driver and have ambitious targets to dramatically reduce our fixed and variable cost structure further in 2016.

Both of Corsa’s operating divisions are well positioned to grow in the years ahead, with the mines, mining permits, coal processing infrastructure, and mining equipment in place to expand production once market conditions recover.  Our advantaged position on the delivered cost curve, premium coal qualities, and financial sponsorship will enable Corsa to capitalize on future opportunities.  In addition to our pipeline of organic growth projects, we will continue to pursue acquisitions to grow the company at a time when coal asset values remain at historically low levels." 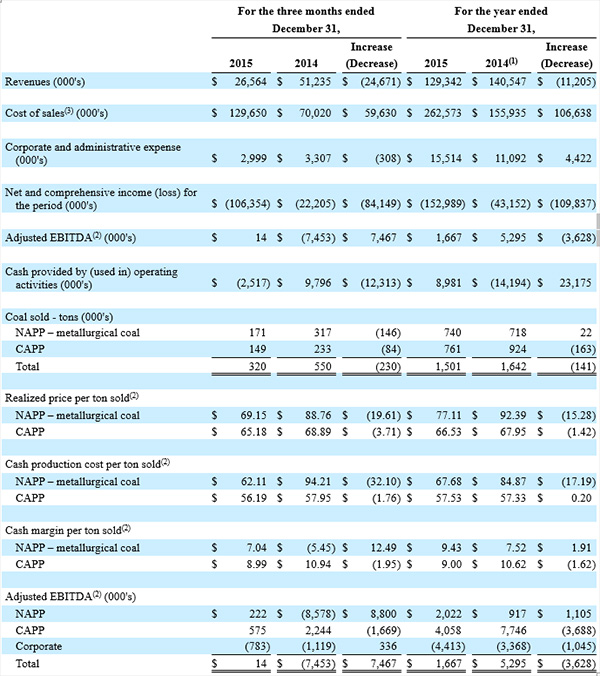 (1) The results of the assets acquired in Corsa's acquisition of PBS Coals are included from the August 19, 2014 acquisition date.
(2) This is a non-GAAP financial measure.  See "Non-GAAP Financial Measures" below.
(3) Cost of sales consists of the following: 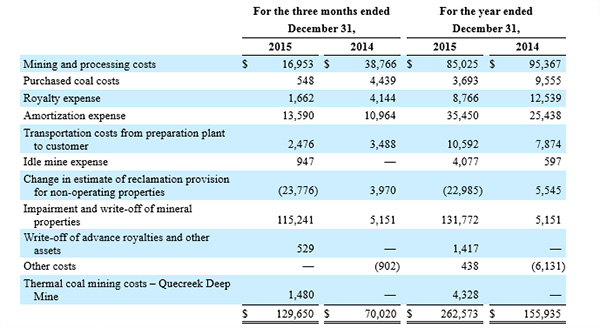 Guidance for the year ended December 31, 2016 is as follows:

Current metallurgical coal prices remain at depressed levels where a substantial amount of global production is uneconomic. This situation arose as a result of global producers committing to multi-billion dollar projects in a significantly higher price environment. Large scale mines often take three or more years from final investment decision to first production. New supply came online over 2013 and 2014, a period where demand growth softened. This supply growth is expected to mitigate in 2016 as the pipeline of growth projects is exhausted and prices are insufficient to incentivize new production. Corsa expects that over time, the fundamentals of the metallurgical coal market will rebalance as supply growth ends and production cutbacks are implemented.

Weak Chinese demand for imported metallurgical coal, in combination with a strong U.S. dollar and low dry bulk freight rates, have put downward pressure on seaborne metallurgical coal pricing.  The first quarter 2016 coking coal benchmark pricing decreased to $81.00 per metric ton, representing a decrease of approximately 9% from the fourth quarter of calendar 2015 and a year-over-year decrease of approximately 31%. The first quarter price is the second time the benchmark settlement was below $90 per metric ton since 2004, on a nominal basis, and represents a point on the cost curve where analysts estimate over half of the global seaborne production is unprofitable.

As metallurgical coal production is rationalized in places like China, Western Canada, Australia and the United States, Corsa expects the seaborne metallurgical coal fundamentals to normalize. Domestically, severe financial distress has caused high profile bankruptcies in 2015 and may lead to additional supply cuts in the near future. This situation has also created an environment where producers are deferring capital expenditures, not reinvesting in reserves or permitting efforts, and are highly vulnerable to supply disruptions. For these reasons, Corsa believes that the domestic market is poised to rebound faster than the international seaborne market. Corsa’s geographic proximity to over 50% of domestic coke production capacity and short rail distance and multiple options to access the Baltimore export terminals solidify Corsa’s ability to take advantage of any recoveries in coal pricing.

Corsa's metallurgical coal sales in 2016 from its NAPP Division are expected to be in the range of 600,000 to 700,000 tons. Approximately 46% of these sales are currently committed at the midpoint of the range. Actual sales will depend on customer demand and market conditions. Vessel nominations for export sales are determined by customers and concluded on a month-by-month basis.  Corsa has the ability to produce and sell significantly more tons of metallurgical coal in 2016, should market conditions improve.

Corsa's thermal coal sales in 2016 from its NAPP Division are expected to be in the range of 250,000 to 350,000 tons.  Approximately 50% of these sales are currently committed at the midpoint of the range.  Actual sales will depend on customer demand and market conditions.

Current Southeastern U.S. utility market thermal coal spot pricing declined 25% over the course of 2015. As a result, much of the Central Appalachia coal production is uneconomic. Corsa expects utility coal demand for Central Appalachia production to decrease in 2016. Conversely, industrial thermal demand grew 4% year over year for 2015 and Corsa expects industrial demand to grow in 2016.

CAPP will continue to target the industrial market segment as it transitions from a utility supplier to an industrial supplier during 2016. The opening of the Cooper Ridge mine will position CAPP to service the industrial specialty coal markets. These specialty markets are well suited for CAPP’s coal qualities and relatively protected from natural gas prices and historically reflect higher pricing than the thermal markets.

The CAPP Division coal sales for 2016 are expected to be in the range of 675,000 to 775,000 tons. Approximately 55% of these sales are currently committed at the midpoint of the range. Actual sales will depend on customer demand and market conditions.

Corsa also announces that it has received and accepted the resignation of Daniel D. Smith as a director of the Corporation with immediate effect.  Corsa wishes to thank Mr. Smith for his contributions to Corsa's Board of Directors (the "Board") and its audit committee since his initial appointment in July 2013.  Ronald G. Stovash succeeds Mr. Smith on Corsa's audit committee.

The Board does not expect that a successor for Mr. Smith will be appointed prior to the next annual general meeting of shareholders of Corsa.

Management uses realized price per ton sold, cash production cost per ton sold and adjusted EBITDA as internal measurements of operating performance for Corsa’s mining and processing operations.  Management believes these non-GAAP measures provide useful information for investors as they provide information in addition to the GAAP measures to assist in their evaluation of the operating performance of Corsa.  Reference is made to the Management’s Discussion and Analysis for the three months and full year ended December 31, 2015 for a reconciliation of non-GAAP measures to GAAP measures.

Refer to Corsa’s audited Consolidated Financial Statements for the years ended December 31, 2015 and 2014 and related Management’s Discussion and Analysis, filed under Corsa's profile on www.sedar.com for details of the financial performance of Corsa and the matters referred to in this news release.

Forward-Looking Statements
Certain information set forth in this press release contains “forward-looking statements” and “forward-looking information” under applicable securities laws. Except for statements of historical fact, certain information contained herein relating to projected sales, coal prices, coal production, mine development, the capacity and recovery of Corsa’s preparation plants, expected cash production costs, geological conditions, future capital expenditures and expectations of market demand for coal,  constitutes forward-looking statements which include management’s assessment of future plans and operations and are based on current internal expectations, estimates, projections, assumptions and beliefs, which may prove to be incorrect. Some of the forward-looking statements may be identified by words such as “estimates”, “expects” “anticipates”, “believes”, “projects”, “plans”, “capacity”, “hope”, “forecast”, “anticipate”, “could” and similar expressions. These statements are not guarantees of future performance and undue reliance should not be placed on them. Such forward-looking statements necessarily involve known and unknown risks and uncertainties, which may cause Corsa’s actual performance and financial results in future periods to differ materially from any projections of future performance or results expressed or implied by such forward-looking statements. These risks and uncertainties include, but are not limited to: risks that the actual production or sales for the 2016 fiscal year will be less than projected production or sales for this period; risks that the prices for coal sales will be less than projected; liabilities inherent in coal mine development and production; geological, mining and processing technical problems; inability to obtain required mine licenses, mine permits and regulatory approvals or renewals required in connection with the mining and processing of coal; risks that Corsa’s preparation plants will not operate at production capacity during the relevant period, unexpected changes in coal quality and specification; variations in the coal mine or preparation plant recovery rates; dependence on third party coal transportation systems; competition for, among other things, capital, acquisitions of reserves, undeveloped lands and skilled personnel; incorrect assessments of the value of acquisitions; changes in commodity prices and exchange rates; changes in the regulations in respect to the use, mining and processing of coal; changes in regulations on refuse disposal; the effects of competition and pricing pressures in the coal market; the oversupply of, or lack of demand for, coal; inability of management to secure coal sales or third party purchase contracts; currency and interest rate fluctuations; various events which could disrupt operations and/or the transportation of coal products, including labor stoppages and severe weather conditions; the demand for and availability of rail, port and other transportation services; the ability to purchase third party coal for processing and delivery under purchase agreements; and management’s ability to anticipate and manage the foregoing factors and risks. The forward-looking statements and information contained in this press release are based on certain assumptions regarding, among other things, coal sales being consistent with expectations; future prices for coal; future currency and exchange rates; Corsa’s ability to generate sufficient cash flow from operations and access capital markets to meet its future obligations; the regulatory framework representing royalties, taxes and environmental matters in the countries in which Corsa conducts business; coal production levels; Corsa’s ability to retain qualified staff and equipment in a cost-efficient manner to meet its demand; and Corsa being able to execute its program of operational improvement and initiatives. There can be no assurance that forward-looking statements will prove to be accurate, as actual results and future events could differ materially from those anticipated in such statements. The reader is cautioned not to place undue reliance on forward-looking statements. Corsa does not undertake to update any of the forward-looking statements contained in this press release unless required by law. The statements as to Corsa’s capacity to produce coal are no assurance that it will achieve these levels of production or that it will be able to achieve these sales levels.