Peter Merritts, Chief Executive Officer of Corsa, commented, “The reduced production schedule implemented during the third quarter was a difficult decision because it resulted in the layoff of dedicated and hard-working employees, however, it was necessary to balance our production with our contractual commitments while allowing us to maintain our strategic inventory and to quickly and efficiently increase production in response to positive market opportunities.

Although our third quarter cash costs per produced ton sold were negatively impacted by the lower production levels, our focus on reducing controllable costs and the continued high level of performance from our operations served to minimize our cash production costs during this period of depressed spot market prices.  The export market index-based sales that negatively impacted our third quarter results were transacted as we worked to balance our production and inventories and, due to our production discipline, we are better positioned to minimize these types of sales.

We are continuously monitoring the market for profitable opportunities and have the strategy, facilities and, most importantly, the personnel to increase our production to serve those orders.  The Corsa team is ready to respond when the metallurgical coal market strengthens and the price environment recovers.” 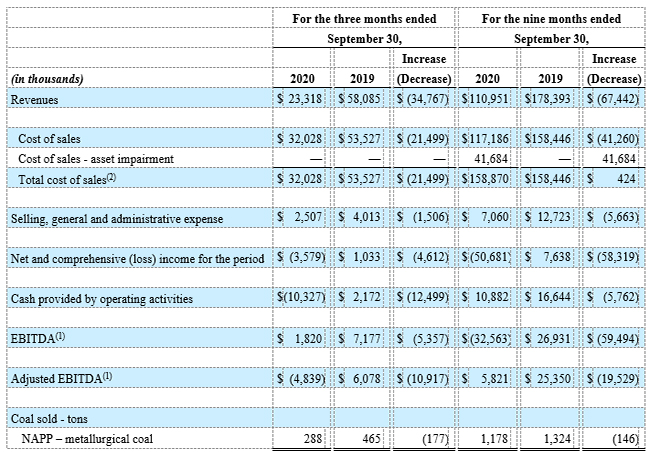 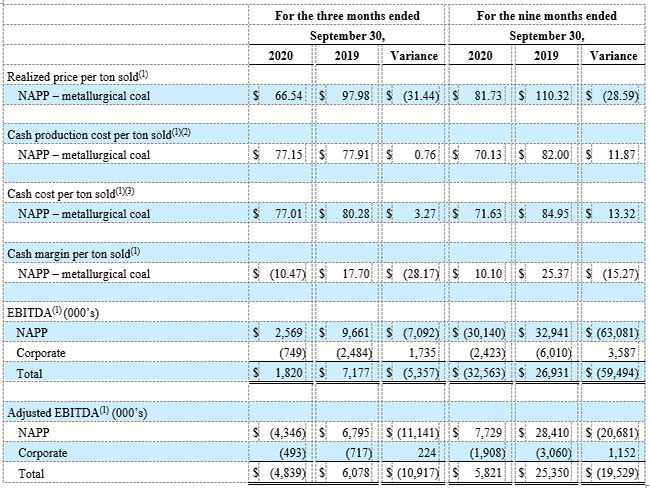 On January 30, 2020, the World Health Organization declared the COVID-19 outbreak a “Public Health Emergency of International Concern” and on March 11, 2020, declared COVID-19 a pandemic. The current COVID-19 pandemic is significantly impacting the global economy and commodity and financial markets. The full extent and impact of the COVID-19 pandemic remains unknown and continues to rapidly evolve. Given the extreme volatility in financial markets and commodity prices, along with uncertainty regarding the impact thereof on the future performance of the Company, the Company does not believe it is appropriate to issue guidance for the remainder of fiscal 2020.  If the impacts of the COVID-19 outbreak, including the decrease in economic activity or restrictions on certain business activities, continue for an extended period of time or worsen, it could have a negative impact on the demand for metallurgical coal and/or business activities, which would have a material adverse effect on our business, financial condition, cash flows and results of operations.  The Company will continue to evaluate events and circumstances and will provide guidance when appropriate and as information is available.

The World Steel Association reported that, through September 2020, global crude steel production fell by 3.2% in the first nine months of 2020 versus the comparable period in 2019.  However, due to the impact of the COVID-19 pandemic on those submitting production data, the report cautioned that some estimates were used and that the number could be revised in the next update.  For the first nine months of 2020, production was up 4.5% in China and was down 19.2% in the U.S., 19.1% in Japan and 16.5% in India.  Crude steel production from the European Union and Brazil was down 17.9% and 9.7%, respectively.  Regionally, Asia, which includes China and India, increased by 0.2%, North America decreased by 18.2% and South America decreased by 13.9%.

The forward curve for the fourth quarter of 2020 according to the TSI index is trading in the mid-$120s/mt FOBT range with December in the high $120s/mt FOBT and the 2021 forward curve is in the mid $140s/mt FOBT.  Import quota restrictions enforced by Chinese authorities and trade tensions between China and Australia continue to impact the supply and demand balance of the seaborne metallurgical coal market in the second half of 2020 and increased the price volatility in spot transactions and futures markets.  Domestic metallurgical coal market contract negotiations for 2021 are underway and will be finalized as we approach the end of the year.  Increased steel production coupled with supply-side inventory reductions and geographical and grade specific metallurgical coal production constraints support an environment of increasing spot market coal prices in 2021.  Price volatility is expected as future demand for metallurgical coal and the availability of supply will be impacted by, among other things, country specific and regional efforts to contain and control the spread of the COVID-19 virus, the economic stimulus activities of each country and global organizations and the operating status and capabilities of our customers and competitors.  Due to the uncertainty of the global business impact of COVID-19 on both metallurgical coal supply and demand, on March 30, 2020, Corsa suspended the provision of additional commentary regarding expectations for 2020 metallurgical coal prices.  Metallurgical coal supply, demand and pricing outlook commentary will be resumed when deemed appropriate by the Company.

See “Risk Factors” in the Company’s annual information form dated March 30, 2020 for the year ended December 31, 2019 for an additional discussion regarding certain factors that could impact coal pricing trends and outlook, as well as the Company’s ongoing operations.

Refer to Corsa’s unaudited condensed interim consolidated financial statements for the three and nine months ended September 30, 2020 and 2019 and related management’s discussion and analysis, filed under Corsa’s profile on www.sedar.com, for details of the financial performance of Corsa and the matters referred to in this news release.

In September 2020, the Company learned that an overseas third-party sales agent had been charged in an overseas jurisdiction in connection with allegedly unlawful benefits given to a representative of an overseas customer in relation to a sale of coal from operations of U.S. subsidiaries of the Company. A Special Committee of the Board of Directors of the Company was promptly constituted and the Special Committee engaged outside legal counsel to conduct an investigation as to whether any employees of the Company or any of its subsidiaries were aware of, or involved in, the alleged conduct and whether any such knowledge or involvement may have given rise to a violation of anti-corruption laws by the Company or any of its subsidiaries. On the basis of preliminary findings resulting from such investigation, which is ongoing, the Company has taken corrective action to minimize risk.  At this time, no charges have been brought against the Company or any of its subsidiaries in any jurisdiction.  The risks associated with any such charges are uncertain.  However, such risks may include resulting fines and penalties, as well as the disgorgement of some of the profits on revenues received from the customer. Due to the preliminary nature of the investigation and limitations on the ability of the Company to collect evidence, it is not possible to estimate any potential financial exposure.

The Company and its subsidiaries are committed to the highest standards of integrity and diligence in their business dealings and to the ethical and legally compliant business conduct by their employees and representatives. Potentially unlawful business conduct is in direct conflict with corporate and compliance policies. The Company will continue to investigate this matter and cooperate with authorities as needed with a view to a prompt and appropriate resolution.

Certain information set forth in this press release contains “forward-looking statements” and “forward-looking information” (collectively, “forward-looking statements”) under applicable securities laws. Except for statements of historical fact, certain information contained herein including, but not limited to, statements relating to the expected price volatility of the metallurgical coal market, the future demand for steel and its production, the availability of its supply, and the finalization of domestic metallurgical coal market contract negotiations in 2021, constitutes forward-looking statements which include management’s assessment of future plans and operations and are based on current internal expectations, assumptions and beliefs, which may prove to be incorrect. Some of the forward-looking statements may be identified by words such as “will”, “estimates”, “expects” “anticipates”, “believes”, “projects”, “plans”, “capacity”, “hope”, “forecast”, “anticipate”, “could” and similar expressions. These statements are not guarantees of future performance and undue reliance should not be placed on them. Such forward-looking statements necessarily involve known and unknown risks and uncertainties. These risks and uncertainties include, but are not limited to: changes in market conditions, governmental or regulatory developments as a result of the COVID-19 pandemic or otherwise, the operating status and capabilities of our customers and competitors; various events which could disrupt operations and/or the transportation of coal products, including labor stoppages, the outbreak of disease and severe weather conditions; and management’s ability to anticipate and manage the foregoing factors and risks.  There can be no assurance that forward-looking statements will prove to be accurate, as actual results and future events could differ materially from those anticipated in such statements. The reader is cautioned not to place undue reliance on forward-looking statements. Corsa does not undertake to update any of the forward-looking statements contained in this press release unless required by law. The statements as to Corsa’s capacity to produce coal are no assurance that it will achieve these levels of production or that it will be able to achieve these sales levels.