George Dethlefsen, Chief Executive Officer of Corsa, commented, “Metallurgical coal and steel markets remain very healthy as forward pricing for exports appears strong through 2019 and domestic prices are poised to rise in 2019.  Corsa continued to pursue its operational and sales growth objectives during the second quarter.  In the second quarter, we invested heavily in our operations to remain on track for our growth projections.  Multiple operational milestones were achieved in the quarter which are expected to have a positive effect on the long-term value of the mine, but had short-term negative effects on profitability given the mining conditions that were involved.

At our flagship Casselman mine, we have now successfully made the connection to the northeastern reserve base.  This required mining under a stream and incurring additional roof support costs and slower mining advance from February through June.  Because this travel way will be used daily for years, we undertook additional operational measures to ensure the long-term integrity of this area.  We have now successfully mined through this area and have returned to using conventional mining techniques.  At our Acosta mine, during the second quarter, we continued our ramp up of the mine.  In June we completed this effort, with June production reaching full run-rate levels.  All phases of the ramp up are finalized, including staffing, regulatory approvals, equipment deliveries, and mining a significant portion of the main travel way for the mine.  Similar to Casselman, in July and August, productivity and operating costs have been reflective of conventional mining techniques.  Developing a new reserve area at Casselman and ramping up Acosta are major accomplishments that are expected to pay dividends in future periods.  We have experienced more favorable geology and mining conditions at both Acosta and Casselman in the third quarter and expect this trend to continue in the quarters ahead.

With our mining equipment upgrade cycle completed as of this month, we believe we have positioned the company very well for the years ahead.  We now have three underground mines (Casselman, Acosta, and Horning) with long-term reserve life and a full complement of rebuilt or new equipment.  This will reduce maintenance capital expenditures in the coming years and will also improve productivity underground.  Corsa’s cash position at the end of the quarter was impacted by our mining equipment upgrade investment, timing of export customer receipts, geologic conditions at Casselman, the Acosta mine ramp-up and demurrage expenses related to port congestion.  We forecast positive free cash flow for the remainder of the year as cash mining costs return to expected levels and the mining equipment upgrades have been finished.

Our customers’ end markets remain very strong, particularly domestically, where steel prices are near 10-year highs and steel production is expected to increase in the second half of this year and into 2019.  We are currently in a sold out position through November and for the year are 94% committed with our existing order book.  The domestic low volatile metallurgical coal market is particularly tight, as production interruptions at existing operations have recently impacted supply.  Globally, the supply chain is stretched thin and metallurgical coal producers continue to experience problems in getting their coal to market.  Port congestion and rail service continue to be industry-wide problems.  In the second quarter, Corsa incurred $1.5 million of demurrage expense and had several trains pushed into the third quarter.  Metallurgical coal demand is robust, which has supported both spot pricing as well as the forward outlook for prices, which is currently at healthy levels for the coming years.

We have a positive outlook for our business and believe that we are now well positioned with our mining operations and sales to capitalize on a very strong steel and metallurgical coal market.” 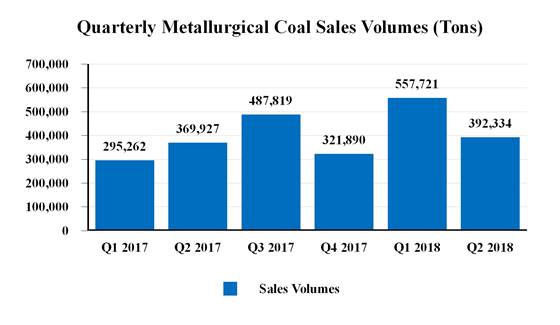 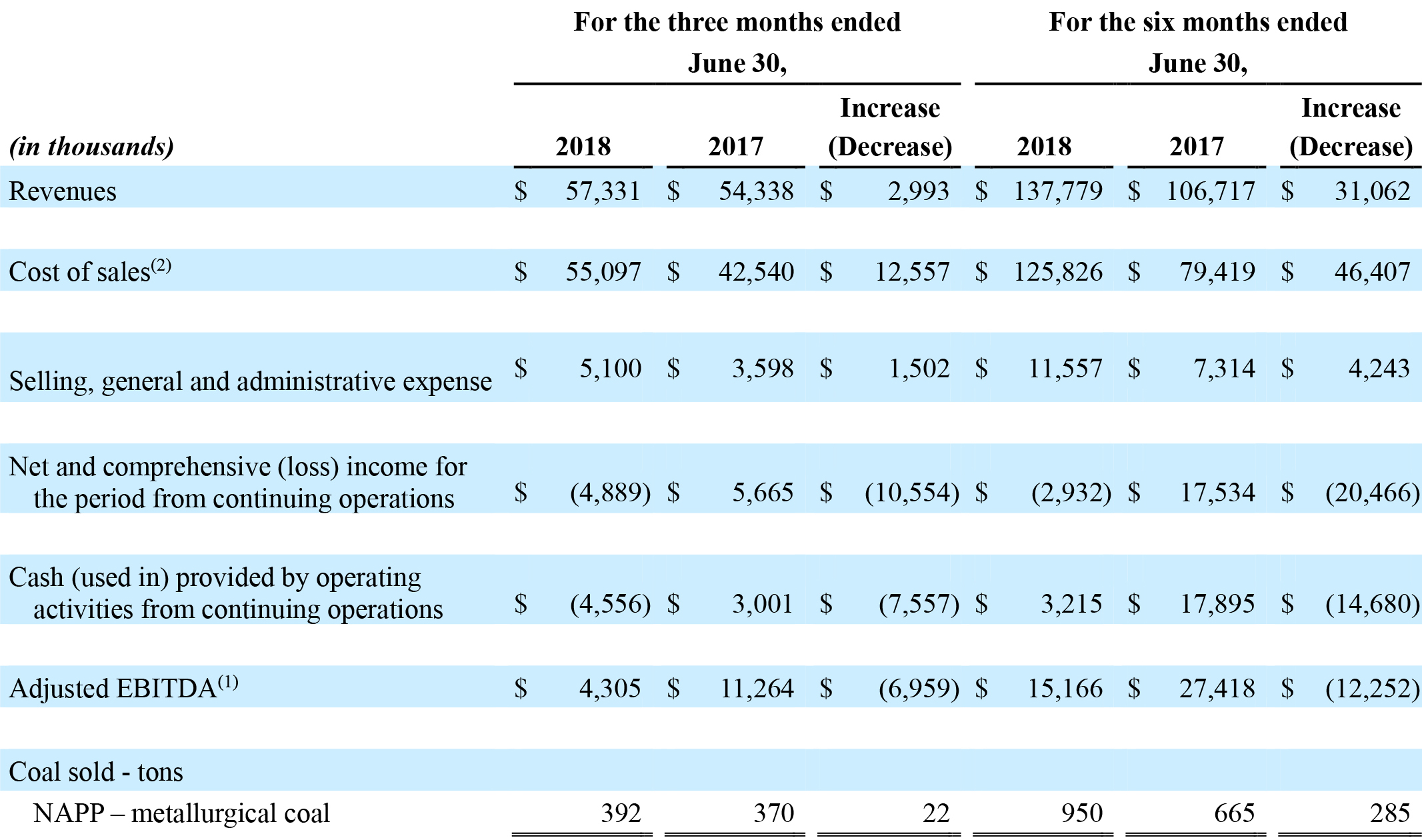 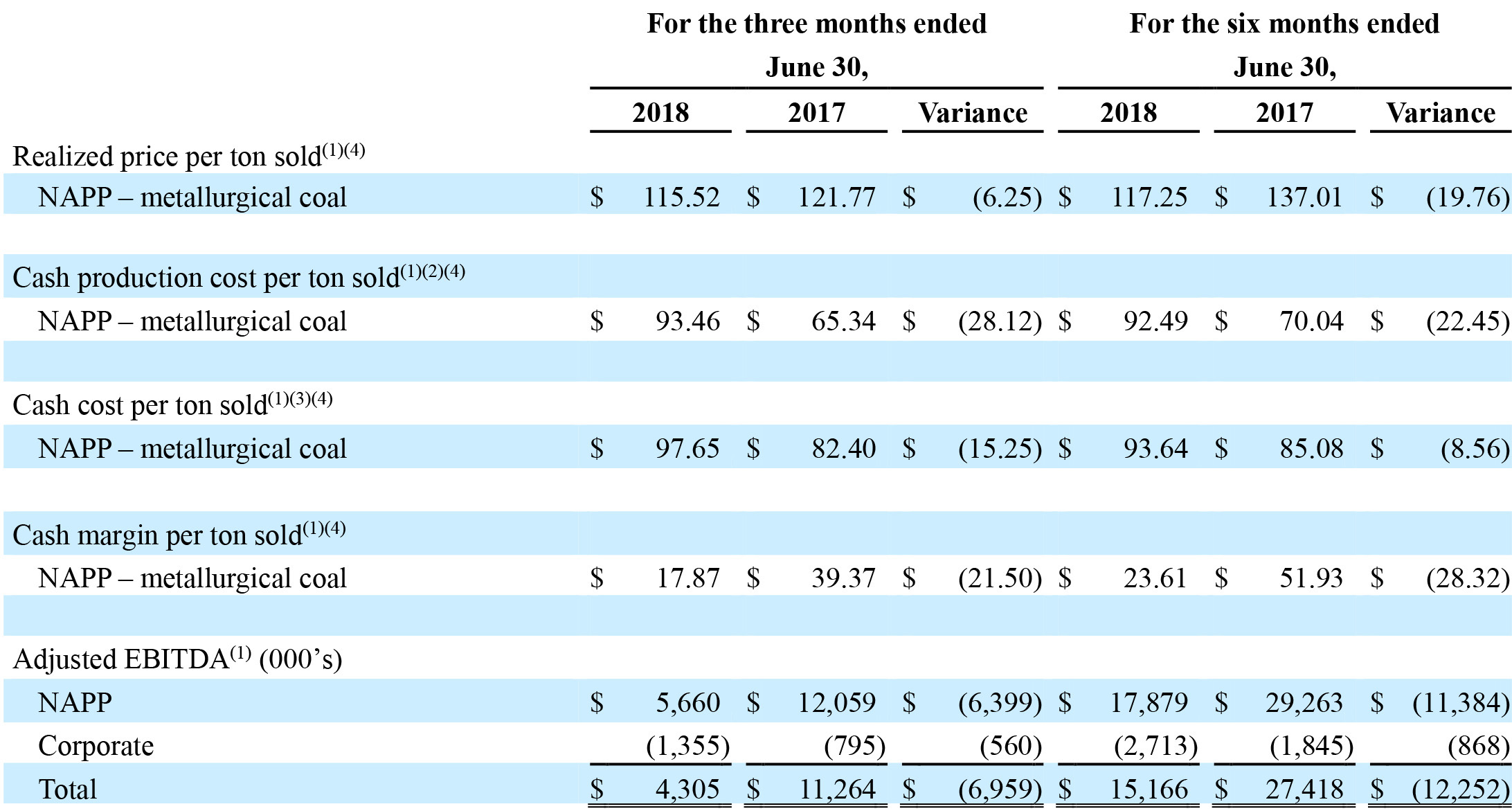 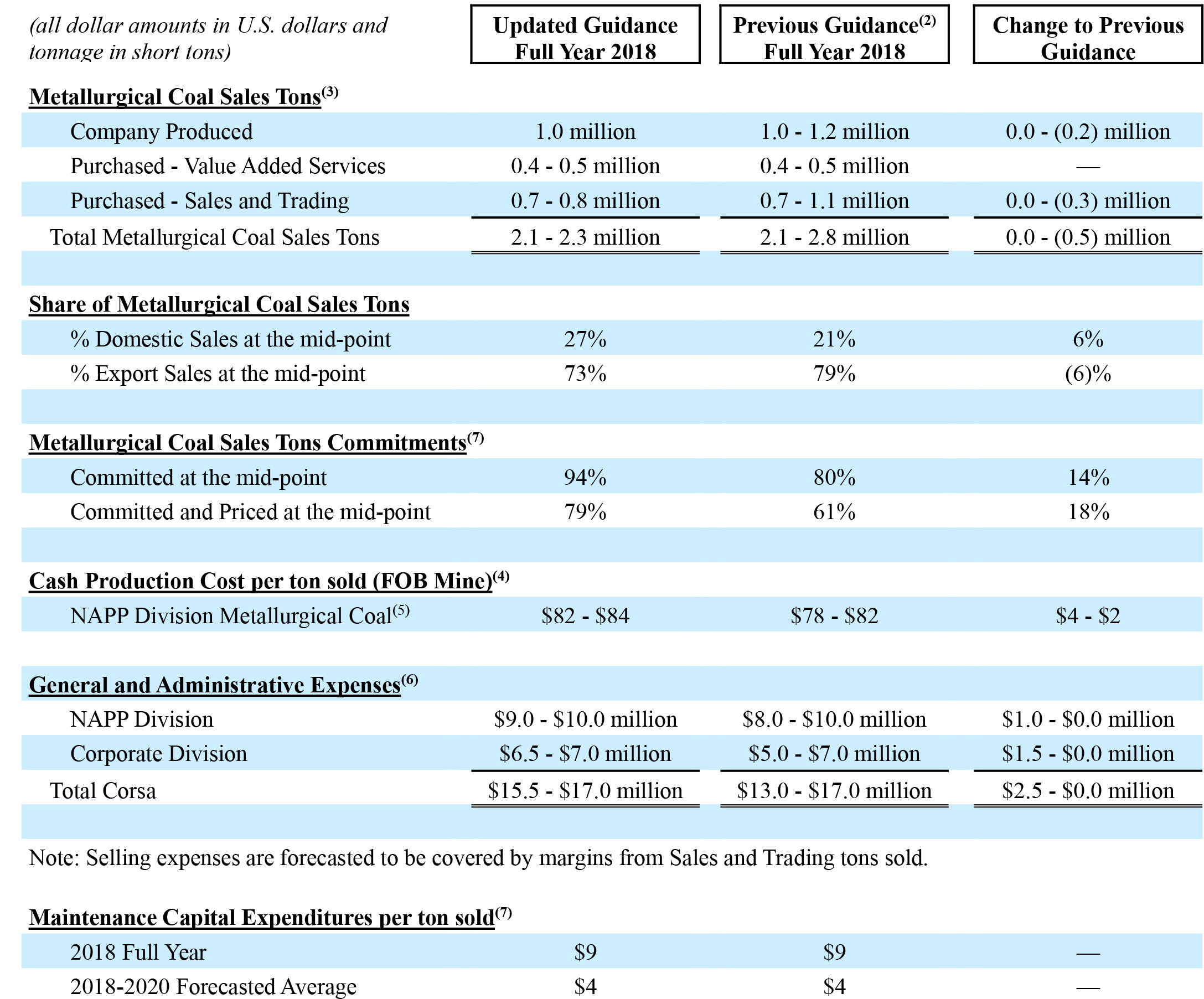 Current market conditions continue to be supportive for metallurgical coal demand globally and domestically.  We expect growing demand from our US customers as they expect to increase blast furnace output in 2018 and 2019.  US steel production is up approximately 2.9% year-to-date (“YTD”).  Spot inquiries from our US customers indicate strong demand and further tightening supply chains.  As a result, several US buyers have moved up their 2019 buying process to earlier in the year.

Global steel demand remains strong as well and continues to drive a healthy US export market. Global steel production is up 5% YTD and has experienced 26 consecutive months of positive growth. Global steel capacity utilization is approximately 78%.  China continues to hit daily steel production records, and their production is up 6.3% YTD while India is up 5.5% YTD.  Corsa has been able to benefit from the strong export market by accessing our international customer base in conjunction with our Value Added Services and Sales and Trading platforms.  By utilizing these platforms, we continue to access third party supplies that complement our production to meet varied export requirements, as well as expand our customer reach.

Throughout this year, we have witnessed extreme congestion at ports which began due to extreme weather conditions and continued as both thermal and metallurgical coal exports markets remained strong.   This has created bottlenecks throughout the domestic and export supply chains.  We continue to witness difficulties in accessing qualified labor and adequate trucking capacity due to a tight labor market.  This is a manifestation of a strong US economy and high demand for qualified workers driven by energy and manufacturing.  The international metallurgical coal price indices are likely to remain volatile as the market digests the uncertainty of trade discussions as well as the impact of limited supply growth amidst transportation issues.  Given these points, the forward curve on international metallurgical coal price indices points towards a constructive forward price environment and we expect pricing to stay above the 90th percentile of the global marginal cost curve over the coming quarters, which we believe to be $150 per metric ton.  As of August 27, 2018, the calendar 2019 forward curve for premium low vol metallurgical coal is at a midpoint of $182 per metric ton and the calendar 2020 forward curve is at $168 per metric ton.  This compares to a spot price today of $183, suggesting that the market expects to remain tight over the coming years.

Refer to Corsa’s unaudited condensed interim consolidated financial statements for the three and six months ended June 30, 2018 and 2017 and related management’s discussion and analysis, filed under Corsa’s profile on www.sedar.com, for details of the financial performance of Corsa and the matters referred to in this news release.

Forward-Looking Statements
Certain information set forth in this press release contains “forward-looking statements” and “forward-looking information” (collectively, “forward-looking statements”) under applicable securities laws. Except for statements of historical fact, certain information contained herein relating to projected sales, coal prices, coal production, mine development, the capacity and recovery of Corsa’s preparation plants, expected cash production costs, geological conditions, future capital expenditures and expectations of market demand for coal,  constitutes forward-looking statements which include management’s assessment of future plans and operations and are based on current internal expectations, estimates, projections, assumptions and beliefs, which may prove to be incorrect. Some of the forward-looking statements may be identified by words such as “estimates”, “expects” “anticipates”, “believes”, “projects”, “plans”, “capacity”, “hope”, “forecast”, “anticipate”, “could” and similar expressions. These statements are not guarantees of future performance and undue reliance should not be placed on them. Such forward-looking statements necessarily involve known and unknown risks and uncertainties, which may cause Corsa’s actual performance and financial results in future periods to differ materially from any projections of future performance or results expressed or implied by such forward-looking statements. These risks and uncertainties include, but are not limited to: risks that the actual production or sales for the 2018 fiscal year will be less than projected production or sales for this period; risks that the prices for coal sales will be less than projected; liabilities inherent in coal mine development and production; geological, mining and processing technical problems; inability to obtain required mine licenses, mine permits and regulatory approvals or renewals required in connection with the mining and processing of coal; risks that Corsa’s preparation plants will not operate at production capacity during the relevant period, unexpected changes in coal quality and specification; variations in the coal mine or preparation plant recovery rates; dependence on third party coal transportation systems; competition for, among other things, capital, acquisitions of reserves, undeveloped lands and skilled personnel; incorrect assessments of the value of acquisitions; changes in commodity prices and exchange rates; changes in the regulations in respect to the use, mining and processing of coal; changes in regulations on refuse disposal; the effects of competition and pricing pressures in the coal market; the oversupply of, or lack of demand for, coal; inability of management to secure coal sales or third party purchase contracts; currency and interest rate fluctuations; various events which could disrupt operations and/or the transportation of coal products, including labor stoppages and severe weather conditions; the demand for and availability of rail, port and other transportation services; the ability to purchase third party coal for processing and delivery under purchase agreements; and management’s ability to anticipate and manage the foregoing factors and risks. The forward-looking statements and information contained in this press release are based on certain assumptions regarding, among other things, coal sales being consistent with expectations; future prices for coal; future currency and exchange rates; Corsa’s ability to generate sufficient cash flow from operations and access capital markets to meet its future obligations; the regulatory framework representing royalties, taxes and environmental matters in the countries in which Corsa conducts business; coal production levels; Corsa’s ability to retain qualified staff and equipment in a cost-efficient manner to meet its demand; and Corsa being able to execute its program of operational improvement and initiatives. There can be no assurance that forward-looking statements will prove to be accurate, as actual results and future events could differ materially from those anticipated in such statements. The reader is cautioned not to place undue reliance on forward-looking statements. Corsa does not undertake to update any of the forward-looking statements contained in this press release unless required by law. The statements as to Corsa’s capacity to produce coal are no assurance that it will achieve these levels of production or that it will be able to achieve these sales levels.