George Dethlefsen, Chief Executive Officer of Corsa, commented, “2017 was a year of tremendous growth and record profitability for Corsa, driven by volume growth across all of our metallurgical coal platforms and a strong overall market environment for steel and metallurgical coal.

A year ago, we laid out milestones related to increasing production at our NAPP Division, expanding our Sales and Trading platform, and increasing utilization at our preparation plants.  We accomplished all of these objectives in 2017.  Overall, metallurgical coal sales at Corsa grew by 141%, we acquired several new international customers and one new domestic customer, and we restarted our Shade Creek preparation plant.  We opened the Acosta Deep Mine in June of last year, which is going well, we opened two surface mines and this month we expect to begin production at the Horning Mine.  In addition, we expect to begin production at the Keyser deep mine, another low volatile metallurgical coal mine in Somerset County, Pennsylvania in 2019.  The production from these three mines, in combination with production from our existing mines, is anticipated to double Corsa’s low volatile metallurgical coal production in 2019 as compared to 2017 levels.

The sale of our CAPP Division divests Corsa of its thermal coal mining assets and establishes Corsa as a pure play metallurgical coal producer.  This move enables our team to focus its time and resources exclusively on our metallurgical growth initiatives and avoids future environmental liabilities and end-of-mine closure costs in Tennessee.

In the fourth quarter 2017, we had multiple shipments delayed by weather disruptions to the export logistics chain, thereby impacting metallurgical sales volumes and profitability.  We are optimistic that these issues will get resolved in the near term.  Our outlook for the future remains bullish.  The steel and coke markets globally are very healthy, creating strong demand for our product.  Domestically, steel prices are soaring, which has already stimulated incremental steel production and incremental demand for metallurgical coal.  Supply for metallurgical coal remains tight globally, particularly for the premium qualities.  We remain focused on all four aspects of our growth strategy, including the development of our permitted mines, exploration and permitting efforts, investing in our Sales and Trading platform and pursuing acquisitions.” 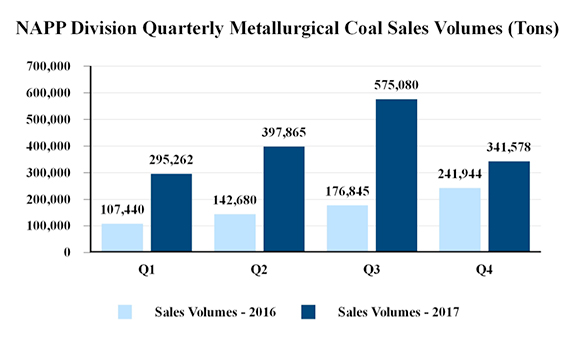 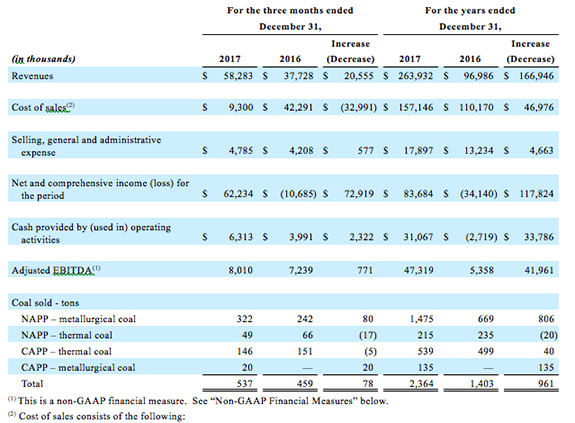 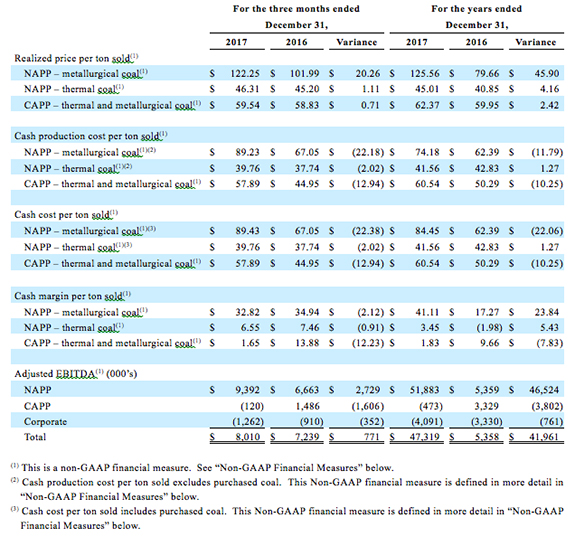 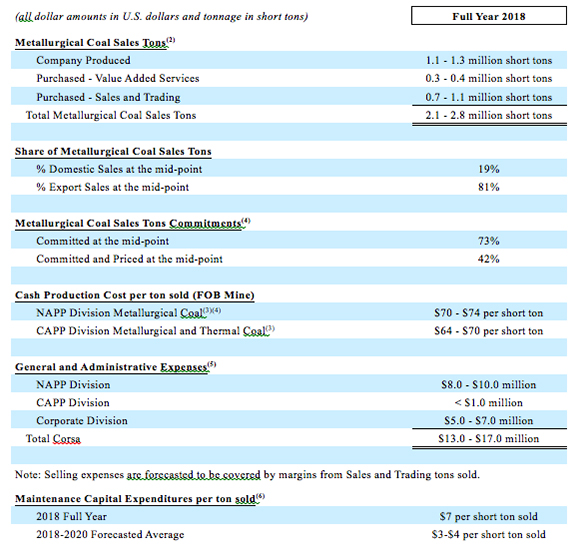 Following a softening price environment in the early part of the fourth quarter of 2017, strong demand and a tight supply worked together to support increased spot prices for low volatile metallurgical coal prices both in the fourth quarter of 2017 and well into 2018.  The global metallurgical coal market remains tight, with little high quality met coal available for purchase.  Fourth quarter 2017 logistics issues led to long vessel queues in Australia and a resulting premium for high quality metallurgical coal cargos.  Severe weather on the United States east coast also disrupted coal mining operations, limited railroad activities, and shut down export terminals late in the quarter putting additional upward pressure on spot prices.  Chinese domestic metallurgical coal prices remain elevated due to strong steel production and government policy initiatives to decrease coal production capacity and consolidate coal production.  The forward curve for low volatile metallurgical coal prices for calendar 2018 is supported by high levels of steel production globally, including the Indian market which is poised to become the world’s second largest steel producing country.  Steel production in the United States also remains strong with continued economic growth, the potential for significant infrastructure spending, and the recent steel trade actions which have lifted prices and profitability for the steel producers.  We continue to see high levels of interest for low, medium, and high vol coals from our international customers.

The NAPP Division’s geographic proximity to over 50% of domestic coke production capacity and short rail distance and multiple options to access the Maryland and Virginia export terminals solidify Corsa’s ability to serve both domestic and international customers.  Our Sales and Trading platform operations also give us the ability to market a greater variety of products, access more users and increases our ability to respond to sales opportunities.

Refer to Corsa’s audited consolidated financial statements for the years ended December 31, 2017 and 2016 and related management’s discussion and analysis, filed under Corsa’s profile on www.sedar.com, for details of the financial performance of Corsa and the matters referred to in this news release.

Certain information set forth in this press release contains “forward-looking statements” and “forward-looking information” under applicable securities laws. Except for statements of historical fact, certain information contained herein relating to projected sales, coal prices, coal production, mine development, the capacity and recovery of Corsa’s preparation plants, expected cash production costs, geological conditions, future capital expenditures and expectations of market demand for coal,  constitutes forward-looking statements which include management’s assessment of future plans and operations and are based on current internal expectations, estimates, projections, assumptions and beliefs, which may prove to be incorrect. Some of the forward-looking statements may be identified by words such as “estimates”, “expects” “anticipates”, “believes”, “projects”, “plans”, “capacity”, “hope”, “forecast”, “anticipate”, “could” and similar expressions. These statements are not guarantees of future performance and undue reliance should not be placed on them. Such forward-looking statements necessarily involve known and unknown risks and uncertainties, which may cause Corsa’s actual performance and financial results in future periods to differ materially from any projections of future performance or results expressed or implied by such forward-looking statements. These risks and uncertainties include, but are not limited to: risks that the actual production or sales for the 2018 fiscal year will be less than projected production or sales for this period; risks that the prices for coal sales will be less than projected; liabilities inherent in coal mine development and production; geological, mining and processing technical problems; inability to obtain required mine licenses, mine permits and regulatory approvals or renewals required in connection with the mining and processing of coal; risks that Corsa’s preparation plants will not operate at production capacity during the relevant period, unexpected changes in coal quality and specification; variations in the coal mine or preparation plant recovery rates; dependence on third party coal transportation systems; competition for, among other things, capital, acquisitions of reserves, undeveloped lands and skilled personnel; incorrect assessments of the value of acquisitions; changes in commodity prices and exchange rates; changes in the regulations in respect to the use, mining and processing of coal; changes in regulations on refuse disposal; the effects of competition and pricing pressures in the coal market; the oversupply of, or lack of demand for, coal; inability of management to secure coal sales or third party purchase contracts; currency and interest rate fluctuations; various events which could disrupt operations and/or the transportation of coal products, including labor stoppages and severe weather conditions; the demand for and availability of rail, port and other transportation services; the ability to purchase third party coal for processing and delivery under purchase agreements; and management’s ability to anticipate and manage the foregoing factors and risks. The forward-looking statements and information contained in this press release are based on certain assumptions regarding, among other things, coal sales being consistent with expectations; future prices for coal; future currency and exchange rates; Corsa’s ability to generate sufficient cash flow from operations and access capital markets to meet its future obligations; the regulatory framework representing royalties, taxes and environmental matters in the countries in which Corsa conducts business; coal production levels; Corsa’s ability to retain qualified staff and equipment in a cost-efficient manner to meet its demand; and Corsa being able to execute its program of operational improvement and initiatives. There can be no assurance that forward-looking statements will prove to be accurate, as actual results and future events could differ materially from those anticipated in such statements. The reader is cautioned not to place undue reliance on forward-looking statements. Corsa does not undertake to update any of the forward-looking statements contained in this press release unless required by law. The statements as to Corsa’s capacity to produce coal are no assurance that it will achieve these levels of production or that it will be able to achieve these sales levels.